Virtual Reality has always been associated either with the gaming industry or as a technology destined to be used in the future. The fact is Virtual Reality is no longer science fiction instead it has become a part of present-day reality.

VR (Virtual Reality) bridges the gap between the physical and digital worlds allowing the user to work with the information and content virtually.

What is Virtual Reality?

Virtual Reality (VR) helps to create a computer-generated 3D environment that includes both computer graphics and 360-degree video. It can provide an immersive experience to the users by placing them inside a simulated digital environment.

VR technology works by amalgamating both software and hardware. While the software helps in creating the virtual environment, the hardware supports sensory stimulation like touch, smell, heat intensity, etc. 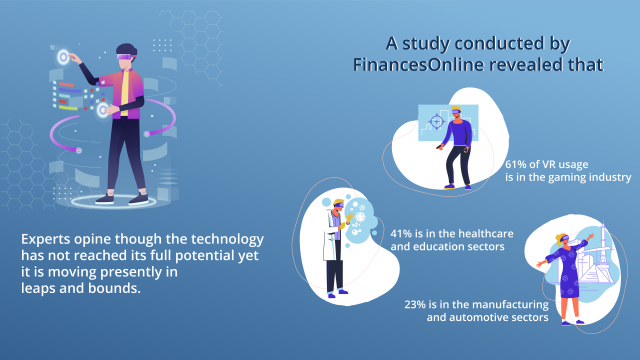 Industries that use VR applications for redefining User Experience

The gaming industry was the domain where the VR system was primarily thought to be used but with technical progression, more industries are willing to explore modern technology.

VR has been enabling industries to showcase their product or service ranges in a new way that wasn’t possible before. Not only these nine industries, but the VR system is also going to be accepted by other industries for its advantages soon.

On the complaint of a devotee based in the USA who was unable to have darshan at Kashi Vishwanath Temple, we took the idea of building an App based on Virtual Reality technology where we have designed a small 3D model of the temple environment based in Varanasi along with the recordings of different poojas (Ganga Pooja, Ganga Aarti, Avishek Pooja, and others) in a 360-degree angle. The developers presented it as an immersive and interactive experience with milk and flowers etc. The devotee based in the USA was happy to have darshan at Kashi Vishwanath temple from the comfort of home. By using Virtual Reality technology, we were able to create an immersive experience of the Shri Kashi Vishwanath Temple located in Varanasi, India.

We applied Virtual Reality technology in Kohler bathroom products to showcase them to potential customers. Oculus Go and Oculus Quest, two headsets have been used in the Kohler Virtual Reality products. For example, potential users can use the bathtub, and water tap without getting wet giving the customer a virtual feel of water being released from these taps. We installed a virtual mirror for Kohler also where the users can watch their 3D avatars in the mirror. This is how we have helped Kohler to showcase their bathroom fittings by using Virtual Reality technology.

A few major industries like gaming, healthcare, and real estate have already transformed themselves with the assistance of Virtual Reality technology. Others are already sensing the great potential associated with Virtual Technology and using it for optimizing the production process. While the possibilities associated with VR technology are endless, very soon the technology is going to influence the industries you are associated with, the place where you go to work, etc. Being an expert in Virtual Reality technology, we can help you with interactive 3D VR visualization, Motion VR simulations, Visual and Conceptual design, and much more.

Youngsoft Inc. is an information technology firm, founded in 1996, with headquarters in Wixom, Michigan. With 26 years of experience in IT consulting, staffing, and project management, Youngsoft Inc. has served startups as well as industry leaders.

Get In Touch With Us To Learn More About VR Technology.